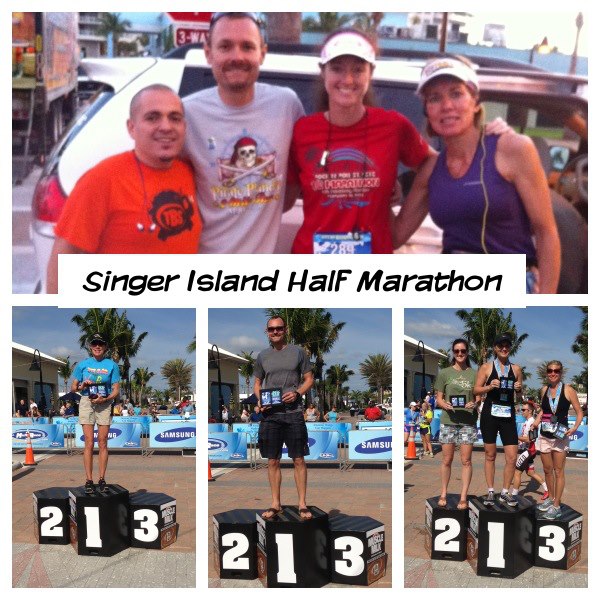 The Inaugural Singer Island Half Marathon

“Too Often Does Not… BUT this time DID!”

After a dismal half marathon in St. Pete in February where I suffered a debilitating and show-stopping side stitch in the last 5k, I was excited at the thought of yet another half marathon in my own backyard before the FL summer heat would “normally” begin.

I basically piggy-backed about 9 weeks of the MN 12 week advanced half schedule on to the end of the St. Pete race and off I went – following the plan and having good results in local races.

My goal at Singer Island was to PR. I hadn’t yet broken 1:40 this time around and felt this goal was within reach.

As the Singer Island event drew closer, I made note of the course map. Runners would do four total crossings of a particular bridge that links West Palm with Rivera Beach: the Blue Heron Blvd Bridge.

First mistake: I assumed this would be like the causeways we run on in my home area of Melbourne.

Second mistake: I didn’t do enough intense hill work to prepare for this beast.

Oddly enough, it was only through some online post about a sailor planning a route for his behemoth boat that I was able to finally realize the actual elevation of this bridge – 93’. Enough said. It was the week before the race and not much I could do about it but, well… worry.

Sidebar to this part: Most of you know all about what I’m writing here and it is an oddity that I couldn’t seem to get this part working until now.

I decided to get the rest of my house in order for this race and figure out sleep the night before, fueling, etc. Happily I noticed Coach P online last week and he gave me some tremendous advice on dinner the night before, breakfast the morning of and FUELING DURING THE RACE.

I am writing this in caps because I usually am very bad about this part. I fumble blocks, I dribble gel – so often in fact that one of our fellow runners who made the trip with us (and won the whole race!!), saw a trail of shot blocks on his third / fourth bridge crossings and was certain I’d dropped all of my blocks on the way out during crossings 1 / 2.

Here is what Coach Patrick told me:

Eat a big lunch on Friday.

Eat a very light dinner on Friday night, going to be slightly hungry.

Eat b’fast 3 hrs before the race.

Eat a shot block every two miles during the race.

Drink on the course

Freakishly I actually DID follow these directions and I’m here to say that this saved me in this race.

Not only was it hot during the race, 75 at the start and 79 at the end, the wind was blowing and, well, there was the bridge.

I NEVER/RARELY drink course water or other offered beverages but drank at every stop. Cytomax was offered on two of the stops and I guzzled that down, too. No sloshing, no weirdness, choked a few times from inexperience but it all worked out!

I will forever and always follow this routine unless any of you come up with something better.

Met three friends and drove down together in one of my husband’s shuttle vans. Left at 3:45am and arrived at Riviera Beach around 5:45am. Drove across the bridge in the dark – somewhat meaningless but we could see the arch of the lightpoles at the top and that was a bit ominous (to say the least).

Multirace put on a great event but there were no porta-johns at the start. Weird, I know. Fortunately my kind sister flew into West Palm the night before and was staying in Riviera Beach. We all drove the few blocks down to her hotel to pick her up and happily used her hotel’s lobby bathroom during that stop. Nice…

Race kicked off right on time at 7am.

Started off at the base of the first bridge crossing with the wind at my back. Nice… didn’t seem too bad right at that moment

Got over and back for the first two crossings and found myself feeling relatively good for the start of the portion that included 8 total miles out and back along scenic A1A, right next to the ocean.

This was a good stretch but also when I started fumbling for shot blocks and dealing with water. A bit of stress and anxiety ensued but after a gulp of water and a successful shot block chewing/swallowing, I was in good shape.

Found myself cruising along with two other ladies in that 3rd mile and could feel the pace quickening. At one point I looked at the current pace and it was down to a 7:17 – a bit too much for me.

Suddenly I saw MarathonNation Tricia P’s post in my head, blaring: “Run Your Own Race, Susie”

Thank you, Tricia. I needed to see that in my crazy head, right then. You truly saved the day with this great advice.

After digesting this intel which had been stored (thankfully, but strangely) in my head, I relaxed and began to really enjoy this race. Had I EVER really enjoyed running a half marathon before? I don’t think so!! I let these two women go and later passed them around 7 or 8.

I continued running my own race and chomping down on my little caffeine laced shot blocks at every even mile marker. I will say that in the heat, with the wind and even the bridge, this was my most enjoyable run to date EVER (and this includes even my speedier days of the past).

Here’s how it all played out from my trusty Garmin:

What a huge amount of valuable lessons I learned during this race.

That’s it for me!

I will probably do this race again – it’s a half marathon like no other but it was fun and it was incredibly scenic.

It’s just shy of two weeks after Boston in 2014, so I may be missing it for next year.

Just go to the bathroom before you get to the start and you’ll be fine!

Thanks again for everybody’s well wishes and help.

One Response to “Singer Island Half Marathon Report – Susie Meltzer”